10 fascinating facts in the history of Venetian fashion

The clothes we wear represent our way of being. And fashion is the visual manifestation of the character, desires, economic aspects and values ​​of an era and of a society, in this case, of Venetian society.

Today we stroll through the fashion in Venice throughout the centuries, and through it, we will discover aspects of its history. Do you want to discover them? WE DISCOVER VENICE THROUGH FASHION.

Venice's wealth was based on the trade in spices and precious fabrics from the East, which were exported throughout Europe. Venice was the capital of fashion for centuries with its magnificent velvets, silks and lace.

The young Paleovenetian aristocrats wore high boots, and a shawl. The women a flared skirt below the knee that touched the cuffs of the high boots

Small bronze statues of Atestine, reconstruct the way of dressing of the men and women of the Veneto region during the first millennium BC.

and in Roman times the Venetians adopted the toga, which they mixed with typical garments such as the cucullo, a hooded cape.

CURIOSITY 1. From them on, the color blue was synonymous of being Venetian

From the 6th century on, the clothing of these pre-Venetians was influenced by contacts with the Greco-Oriental world: the man wears a short tunic fitted at the waist over tight breeches and a purple cloak; the woman two overlapping garments of different lengths. Leather is also used, especially sable and fox. Byzantine influence is still evident in Venetian clothing until the 12th century.

SERENISSIMA, A REPUBLIC WITH A LOT OF GLAMOUR

While in the other states and in the other kingdoms, women were mortified with high-necked dresses and subjected to harsh regulations of very modest wardrobe, Venice discoverede the necklines, heels and impossible hairstyles

But why did Venice become the undisputed queen of fashion? On the one hand, his maritime trade with the East revealed fabrics and brocades never seen before.

CURIOSITY 2. And these special fabrics from the East were mixed with the richness of Burano lace to adorn their dresses.

CURIOSITY 3. Venice always ignored the dictates of the church of Rome, and lived a religion quite independent from the Catholicism of the time, with more freedom regarding laws on clothing in force in other places.

COME ALONG WITH ME THROUGH THE CENTURIES !!!!

IN THE 13TH CENTURY

The mosaics on the portal of San Alipio in the Basilica of Saint Mark, reveal to us dignitaries dressed in long robes to the ankles, with precious belts and noble women with very long robes, tied with short overcoats, necklines and wide sleeves

IN THE 14TH CENTURY

We discover a mosaic of the first half of the fourteenth century in the baptistery of the Basilica Saint Mark.

Salomé already with original elements compared to other fashions, in colors that go from the blue of the inhabitants of the lagoon, to the crimson red of the aristocracy and the doge, and decorations of ermine and vaio (a kind of squirrel) leather.

IN THE 15TH CENTURY

Venice is separated from the rest of Europe, and in the second half of the 15th century, women stop waxing their foreheads (they did it to look taller!), And go on to collect their hair in "fungus" (a mushroom-shaped hairstyle) covering the ears with curly locks.

Under wide dresses with a train, tight-sleeved shirts, open at the elbows from which white fabric comes out. Rounded neckline bodices. The first lace appears in the hems of the dresses.

The nobles, dignitaries, speziali (pharmacists), lawyers wear robes, which can be crimson red, pavonazza (red-violet) or black, with the wide sleeves alla dogalina, tight at the wrist with frills and a band on the shoulders. made of velvet, as in the following detail from a Mansueti painting.

CURIOSITY 5. THE SHOES-STILTS OF 50 CENTIMETERS HIGH

The temptation to increase the height starting from the shoes culminates in Venice: here in the sixteenth century, the taller the shoe, the more noble was the lady, they are called "ciopine "or" calcagnini ", up to 50 centimeters (you have read correctly, half a meter!). Not even Lady Gaga wedges are that tall, as they "only" rise to 35-40 centimeters!

But it is curious, that they were alsoused by common women and prostitutes, without distinction of class, the purpose was to appear taller or perhaps, to walk on the high water (aqua alta) without getting dirty mud dresses.

In Venice each woman wore her Cyopines, and visitors of the time came to the lagoon to admire this type of "sculpture on pedestals" that moved through the streets of the city. And they needed to be accompanied by service ladies so as not to fall down.

During the Renaissance, hair had to be blonde (a bit coppery blonde), and Venetians dyed hairt in the altanas (elevated terraces) the hair colour known as "juvenile water", a liquid made with spices, herbs and even horse urine (which carried ammonia, like current dyes).

CURIOSITY 7. THE IMPOSSIBLE COLLARS, INEVITABLE NOT TO SUFFER TORTICOLIS

The collars of the Burano lacemakers, whose secrets Venice controlled, were fanned up behind the head by means of hidden metal frames. The dresses wore very curious accessories such as weather vane fans. 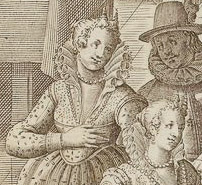 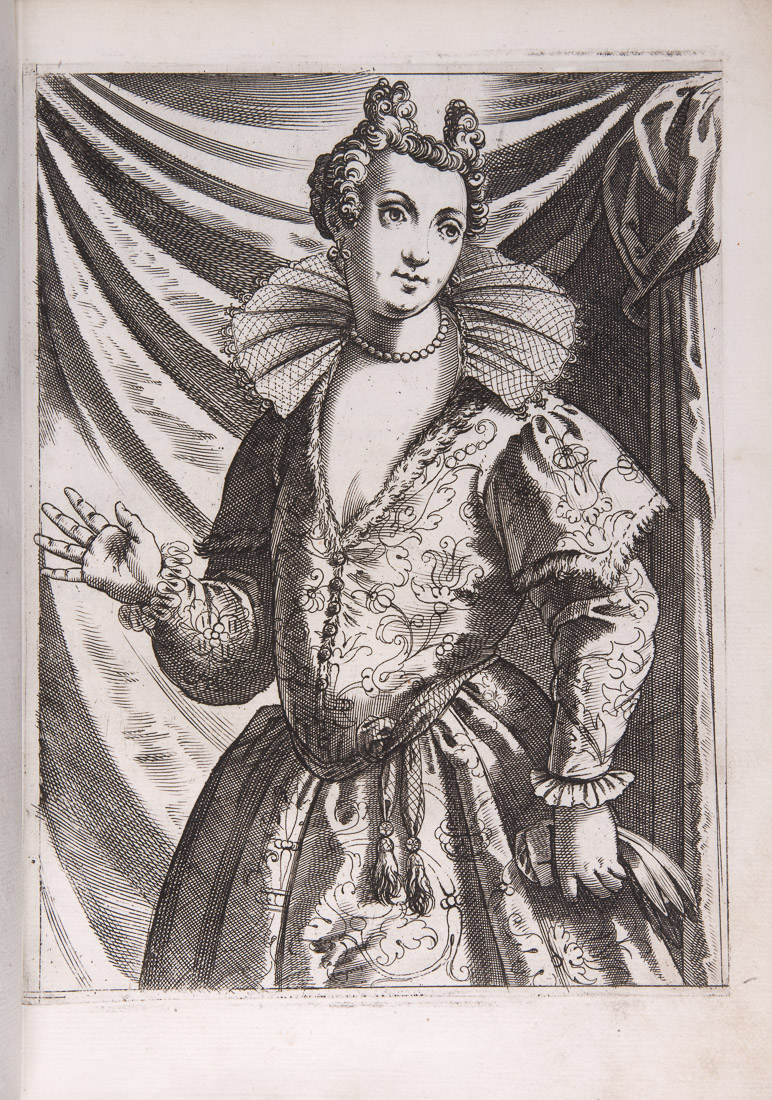 The hair, gathered at the back, is raised on the forehead in two curls in the shape of a horn or half moon (only brides wore their hair down).

The women's fashion of the last 20 years of the 16th century is extravagant, characterized by tight and pointed bustiers, rigid by small internal metal rods, square and deep necklines, an opening in the middle of the front of the shirts enriched with lace and embroidery.

And also, the dangling earrings, an absolute novelty for that time, pierced the lobes “like Moorish women”

IN THE 17TH CENTURY

In the second quarter of a century, the rich Dutch bourgeois had a leading role in Europe, and imposed their round lines. The Venetians wrapped themselves in airy and puffy clothes, giving them the appearance of hot air balloons.

In Venice, as elsewhere, with the identification of the lace accessory as the most important status symbol, the production of lace is reaching its peak. Lace everywhere: collars, cuffs, handkerchiefs, waist bands, shoe ornaments ...

The cuts of women's clothing in the second half of the 17th century are strongly influenced by Versailles. These are jackets over a dress decorated with embroidery and trimmings, with a train behind. The hair is gathered in curls and decorated with hairpieces, ribbons, veils, headdresses with pieces of lace ...

IN THE 18th CENTURY

CURIOSITY 10. THE ANDRIENNE DRESS AND THE CAGES UNDER THE DRESSES

Of French origin, this pompous dress with a pleated train stretching from the shoulders, was painted by Longhi and described in the texts of Carlo Goldoni.

Andrienne dress of a Venetian lady from the 18th century

And the wicker cages arrive under the dresses that reach extreme dimensions (so exaggerated that they cause the production of seats and armchairs without armrests). The bottom hem takes the shape of a gondola.

If for Carnival you want to dress up as an authentic Venetian, you will need ciopine or stilt shoes (and two people to hold you up), a mushroom or horned hairstyle, hair colour in Venetian blonde, and a broad neckline in your brocade lace dress.

In another article we will admire the Carnival dress with masks such as the bauta and the moretta and other curious elements.

Venice raises its levee system and saves itself from a dreaded flood!

CORONAVIRUS AND PINK SWANS IN VENICE